Christian Wilkins celebrates with Tua Tagovailoa after he made his NFL debut against the New York Jets. Photo by Michael Reaves/Getty
click to enlarge 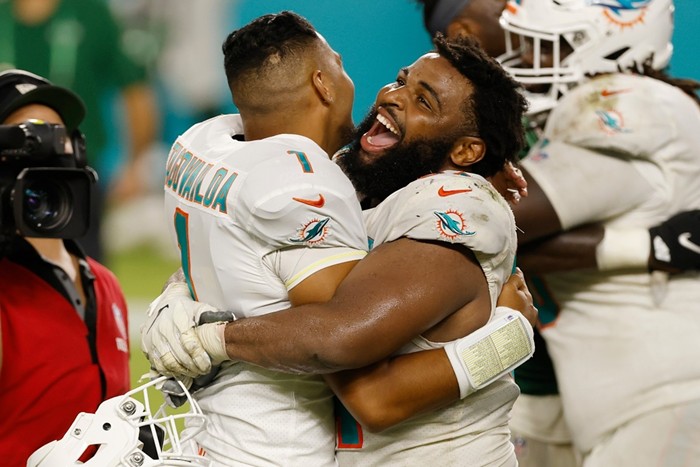 Christian Wilkins celebrates with Tua Tagovailoa after he made his NFL debut against the New York Jets.
Photo by Michael Reaves/Getty
Ladies and gentlemen, welcome to the infamous summer doldrums of South Florida sports. If we all stick together, we can get through this. Coffee and doughnuts are available at the back of the room. Let's talk this out.

Unfortunately, South Florida is notorious for having little in the way of sports excitement to focus on in the summertime. The Marlins are usually struggling to stay out of the NL East cellar (check!), and hockey, football, and basketball are on hiatus.

The summer can get boring for South Florida sports fans. Luckily, we've got you covered.

We've put together a handy guide of dates to save if you're a South Floridian looking to wet your sports whistle. Here are ten things to keep you busy until the Dolphins and Heat return this fall.
Inter Miami returns July 17. Listen, we know. Inter Miami has not been good in its second season on the pitch. There hasn't been much to talk about here as the team has dropped six of its last seven matches.


That's the bad news. The good news? After two weeks off, Inter gets yet another much-needed opportunity to capture our attention, as the season resumes with a match against the New York Red Bulls on July 17.

If they were ever going to entertain us, now would be the time!


Whichever one of y'all came up with 'Captain Bamerica' deserves a raise. s/o #HEATTwitter!@Bam1of1 x @usabasketball pic.twitter.com/7Ou8K8zIth

The Tokyo Summer Olympics: July 23. Missing the NBA before it's even gone? You're in luck. After the Finals end, basketball won't be gone for long.

The COVID-postponed Tokyo Summer Olympics kick off July 23, and with that comes basketball. As usual, a Heat star is at the forefront of the Olympic team, as Bam Adebayo leads USA's crop of big men.

"Captain Bamerica" and the U.S. Olympic basketball team got off to a horrendously embarrassing start this past weekend with a three-point loss to Nigeria, a team led by three backup Heat players, KZ Okpala, Precious Achiuwa, and Gabe Vincent.

No worries, though. The "real" games don't begin until the teams get to Tokyo.
NHL free agency opens July 29. How do you follow up one of the greatest seasons in franchise history? If you're a Florida Panthers fan, you hope it's by adding to what is already a strong team via free-agency signings.

The Panthers will have to take care of their own first. Sam Bennett and Anthony Duclair are two likely targets to return. The team will also likely need to add a goalie, because backup Chris Driedger is on his way to a team that will make him a high-paid starter.

New players are always fun. NHL free-agency hype may be new to Miamians, but it's a thing now!
The NBA Draft: July 29. The good news is that the NBA draft is only a few weeks away. The bad news is that the Miami Heat is not currently set to participate, as the team traded away its first- and second-round picks.

But just because the Heat doesn't currently have any picks doesn't mean there won't be some Heat-related action taking place on July 29. Not only is it entirely possible the Heat buy or trade for a second-round pick, but the NBA draft is also normally prime real estate for big NBA trades.

No matter the circumstances, the NBA draft is always a welcome distraction. No draft changes the landscape of a professional sports league as it does in basketball.

The Miami Dolphins are officially back on the practice field at the end of this month. No more Davie practices, however. The team will now practice at a new facility, the Baptist Health Training Complex, located on the northwest side of Hard Rock Stadium in Miami Gardens.
NBA free agency opens August 2. While NHL free agency may not be something Miamians are accustomed to monitoring, obsessing over NBA free agency is practically a South Florida summer tradition. This season will be no different.

The Heat has some major decisions to make. Most notably, how much the team is willing to pay Duncan Robinson, and if management can figure out a way to keep Kendrick Nunn on the roster. While the free-agency period is always exciting, no huge moves for the Heat are expected via signings. Those potential big moves would likely come via trade.

With Pat Riley, you never know. Kawhi Leonard could be on the Miami Heat a month from now. It's possible.
The NBA Summer League in Las Vegas: August 8-17. As mentioned above, the Miami Heat isn't scheduled to have a selection in the NBA draft. That fact won't diminish one of the most important offseason milestones: the Las Vegas Summer League.

While it's unclear whether Orlando will host its usual version of this event, the NBA says all 30 teams will appear in Vegas. That likely means lots of minutes to assess Precious Achiuwa, KZ Okpala, and other young up-and-coming Heat prospects.

Miami Dolphins kick off their preseason against the Chicago Bears August 14. It may feel like months away, but actual live Miami Dolphins football is less than one month from being back in our lives.

The Dolphins will start their 2021 season with a game against the Chicago Bears on August 14. That's it. That's the tweet. Write it down. Set an alarm.
Miami vs. Alabama: September 2. Three weeks before summer ends, we get football back in a big way when the Hurricanes face off against the annual juggernaut known as the Crimson Tide. A matter of hours into the Hurricanes season, fans will get an idea whether they're in the driver's seat for a national championship run or stuck playing from behind, starting the season with a loss.

As they say in Las Vegas: Bet big to win big. Go big or go home. One ring to rule them all. OK, we're just saying stuff now.
Miami Dolphins open the season against the New England Patriots: September 12. If you're reading this on September 12, you made it. It's the end of a long summer without much in the way of sports, and now the Miami Dolphins are back on the field. Life is good!

The Dolphins have one of the most important seasons in the history of their franchise on tap in 2021. If Tua Tagovailoa looks bad in his second season, it's back to the drawing board. If he looks good, they're in the express lane to competing for Super Bowls every season.

No pressure!
KEEP NEW TIMES BROWARD-PALM BEACH FREE... Since we started New Times Broward-Palm Beach, it has been defined as the free, independent voice of South Florida, and we'd like to keep it that way. With local media under siege, it's more important than ever for us to rally support behind funding our local journalism. You can help by participating in our "I Support" program, allowing us to keep offering readers access to our incisive coverage of local news, food and culture with no paywalls.
Make a one-time donation today for as little as $1. Ryan Yousefi is a freelance writer for Miami New Times, a lover of sports, and an expert consumer of craft beer and pho. Hanley Ramirez once stole a baseball from him and to this day still owes him $10.
Contact: Ryan Yousefi
Follow:
Twitter: @rizzmiggiz

Don't Miss Out
SIGN UP for the latest news, free stuff and more!
Join Today
Sign Up
Become a member to support the independent voice of South Florida and help keep the future of New Times FREE
I Support