Researchers confirmed the origin of a pack of African green monkeys living near the Fort Lauderdale-Hollywood International Airport in Dania Beach. Photo courtesy of Missy Williams
click to enlarge Researchers confirmed the origin of a pack of African green monkeys living near the Fort Lauderdale-Hollywood International Airport in Dania Beach.
Photo courtesy of Missy Williams
They're a pack of outlaws without a cause. Locals know when they're on the gang's turf and when to pay homage with gifts and offerings, but no one knew for sure where they came from or how they came to drive the city bananas for so many years. Now, after years of study, a group of researchers have confirmed the origins of the notorious Dania Beach monkeys and have some idea of the pack's future.

Not far from Fort Lauderdale–Hollywood International Airport, in a forest of mangroves surrounded by parking lots and industrial buildings, lives a community of African green monkeys, or vervets, that has been monkeying around Dania Beach for the better part of 70 years.

The vervets are a well-known sight and photo subject among locals and visitors. Google image results for Park 'N Go, an airport parking service adjacent to the vervets' home, return more photos of the monkeys than they do of the actual facility.

Kyle Jones, co-owner of LauderAle Brewery, just a stone's throw from the Park 'N Go, learned about the vervets not long after opening his business in Dania Beach.


"When we opened up the brewery in 2014, my brother-in-law asked me where I was, and when I explained it to him, he said, 'Oh! Is it over by Monkey Road?'" Jones tells New Times.

Jones says one of the streets near the airport got the name "Monkey Road" in the '90s from locals who'd throw keg parties in the area and see the vervets scampering about and looking for food.

It wasn't long before Jones saw the monkeys himself, and they soon became part of his brewery's identity.

"As time went on, sure as shit you kinda look back and see the monkeys in the trees. Every once in a while, they come around and you can see them climbing," Jones says.

LauderAle named a beer after the primates — the Monkey Road Red — that soon became one of its core drinks on tap. The brewery also sells monkey-themed T-shirts and has a wooden bench carved with a monkey's likeness for visitors to sit back on and drink a brew. 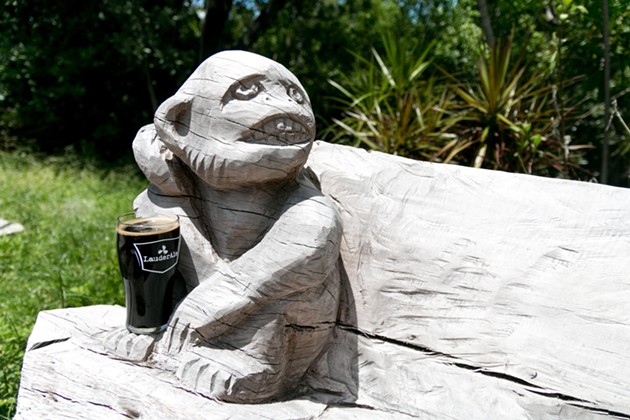 LauderAle Brewery in Dania Beach pays homage to local monkeys with merchandise, drinks, and handmade furniture.
Photo courtesy of LauderAle Brewery
The business also hosts events for people to learn about vervets from experts like Missy Williams, a primate behavior and ecology professor at Florida Atlantic University and founder of the Dania Beach Vervet Project.

Williams was the lead author on a recently published study about the origins of Dania Beach's monkey colony. The study sought to settle once and for all the truth of where the vervets came from and what species they belonged to, and to set a baseline for future study of this unique colony of primates.

"Some people thought they escaped from Monkey Jungle during Hurricane Andrew, others said they had escaped from failed roadside zoo, and some thought they were abandoned pets. There really wasn't 100 percent agreement from the community," Williams tells New Times.

Through research into historical newspaper archives and books and interviews with older residents, Williams and the researchers were able to trace the monkeys to a facility called the Anthropoid Ape Research Foundation, built in Dania Beach in the 1940s by a relative of the Roosevelt family.

The foundation, which came to be known as the Dania Chimpanzee Farm, was founded by TV and film director Armand Denis, who filmed documentaries and wrote books about Africa, where he lived, and about animal conservation. Denis was at one time married to Leila Roosevelt, who was a cousin of Presidents Theodore and Franklin Delano Roosevelt. The farm served as a tourist attraction and a source of monkeys imported from Africa for research for the development of the polio vaccine and other biomedical interests.

The ancestors of the now-famous Dania Beach monkeys, which Williams and her team determined were members of the Chlorocebus sabaeus species likely taken from Sierra Leone in West Africa, escaped from the farm in 1948, before Denis sold the land and it eventually came into the possession of Florida Power & Light in 1956.

Over the course of the study, Williams interviewed people like Peter Karsner, who worked at the Chimpanzee Farm as a guide and alligator wrestler when he was in high school in 1949. Karsner told Williams people at the farm would talk about the escaped monkeys for years, and he always wondered what had happened to them. Williams says they likely ran into what was once sprawling agricultural land before being pushed into their current habitat over the decades.

"If you go back in time and look at the landscape, it was lots of farmland. Once they got out, they were pretty much in farmland. With development over the years, they've closed in on this preserved mangrove area," Williams says.

Since taking up residence in the mangroves near the airport, the colony of vervets has grown more accustomed to people and moved closer into human habitats, acting more like mischievous neighbors than roadside attractions.

Dania Beach resident John Dufresne tells New Times he first saw the monkeys 20 years ago when they paid a visit to his yard after he moved into his current home adjacent to the mangroves.

"I was like, 'What the hell is going on?' I was thrilled in a way. Like, holy shit, nobody has monkeys," Dufresne says.

The visits have become more frequent in the past two decades, as the vervets pop by to munch on Dufresne's plants and vegetables.

"They love hibiscus, just so you know," he says. 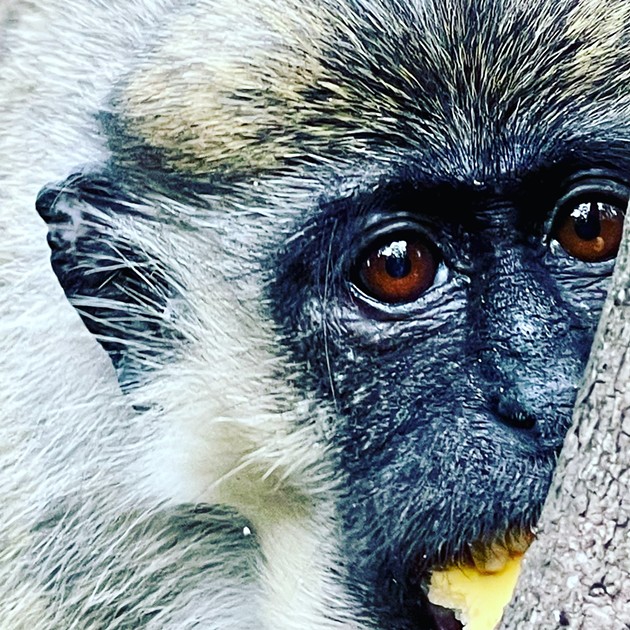 The Dania Beach monkeys love to eat local fruits, vegetables, and apparently, garden plants.
Photo courtesy of Missy Williams
Dufresne, a fiction writer and creative-writing professor at Florida International University, has taken to naming the various monkeys that come to his yard, and he records their visits in his notebook. Two monkeys that he named Alice and Bobby even feature in a novel he's working on about a homeless man who lives in a derelict Dania Beach motel and nurtures a friendship with two primates.

The monkeys are a source of joy for him and his neighbors, Dufresne says, and he doesn't mind that they raid his garden once in a while.

"It's hard to have food when they're around, but I’d rather have them," he says.

Other residents of Dania Beach have been protective of the monkeys over the years as developers and local leaders have tried to remove the creatures from their longtime adopted home.

In 1993, after a driver hit and killed a monkey, nearby property owners sent an animal catcher to try to remove the primate population, fearing lawsuits if someone were bitten. Residents who liked the monkeys blocked the animal catcher, and the city commission passed an ordinance prohibiting people from feeding the monkeys in an effort to leave the animals in peace, according to a report in the Sun Sentinel.

And in 2004, residents opposed development of a condo project, fearing the construction would harm the vervets or interfere with their habitat.

Because the vervets are considered a non-native species, they aren't afforded the same protections from the Florida Fish and Wildlife Conservation Commission as other animals that naturally occur in Florida. That's part of why Williams hopes to raise enough money through her nonprofit, the Dania Beach Vervet Project, to construct a sanctuary for the animals.

There's a chance the colony of about 40 vervets will become extinct within the next 50 to 100 years, according to data projections Williams' team ran during the study.

Williams says the longevity of the colony is at risk from a few threats. First, the females have been giving birth less often. Whereas green monkeys usually have babies once a year, Williams' team observed some females skipping a birthing season, leading to a small decline in population.

The monkeys are also at risk from animal dealers who may try to poach them and sell them as exotic pets, Williams says. If her nonprofit can create a sanctuary for the monkeys, they'd have a better opportunity to protect them from those threats and keep the colony going.

"If we can buy the land [around the forest], that would work," Williams says. "We can use the land for a sanctuary setting to provide veterinary care and provide a safe space for the monkeys to live out the rest of their lives."

Williams says the study confirming the vervets' origins will help in future conservation efforts and serve as the foundation for future research.

Now that the precise species of the monkeys is known, researchers can study the Dania Beach colony's behavior and see how they've adapted to living in South Florida. In particular, Williams is interested in determining whether the Dania Beach monkeys have picked up some new sounds.

In Africa, green monkeys have vocalizations they use to warn other monkeys about nearby predators. They have specific calls for constricting snakes and large birds to describe the threat in detail. Williams wants to know if the Dania Beach monkeys have made new warning calls for coyotes, snapping turtles, and other South Florida species they don't have in their ancestral home.

"It's like looking at evolution in action, from a behavioral perspective," Williams says.

The monkeys themselves are unlikely to care if humans know where they came from and how long they've been around. Chances are, they'll continue monkey business as usual.
KEEP NEW TIMES BROWARD-PALM BEACH FREE... Since we started New Times Broward-Palm Beach, it has been defined as the free, independent voice of South Florida, and we'd like to keep it that way. With local media under siege, it's more important than ever for us to rally support behind funding our local journalism. You can help by participating in our "I Support" program, allowing us to keep offering readers access to our incisive coverage of local news, food and culture with no paywalls.
Make a one-time donation today for as little as $1. Don't Miss Out
SIGN UP for the latest news, free stuff and more!
Join Today
Sign Up
Become a member to support the independent voice of South Florida and help keep the future of New Times FREE
I Support Learn More